“I do not know if we have awarded this degree to a madman or to a genius; only time will tell.”

~ Elies Rogent, Director of the Barcelona Provincial School of Architecture (1878)

The theory that the term “gaudy” is based off the controversial works of architect Antoni Gaudi is unfounded: “gaudy” dates back to the 16th century, while the architect was born in 1852.

And yet, as Mark Twain said, never let the truth get in the way of a good story.

A walk through the crown jewel of Gaudi’s work, however, quickly puts this association to rest. I don’t speak of Barcelona’s Sagrada Familia, the immense modernist church still under construction (as it has been for the past 133 years) but Casa Batlló, a building in the center of the city, redesigned by Gaudi in 1904.

Called “The House of Bones” by some due to its skeletal structure of its balconies – which I interpreted more as coral in form, or even as allusions to carnival masks – the house represents Gaudi’s vision from the entrance to the rooftop. His touch is evident in every corner, every mosaic tile, every ceiling detail.

The facade alone is mesmerizing. While the unusual balconies usually command the viewer’s attention, the exterior wall behind it glitters. Covered in extensive mosaics, it changes with the passing of clouds and the sun’s passage overhead, like sunlight shimmering on a lake. 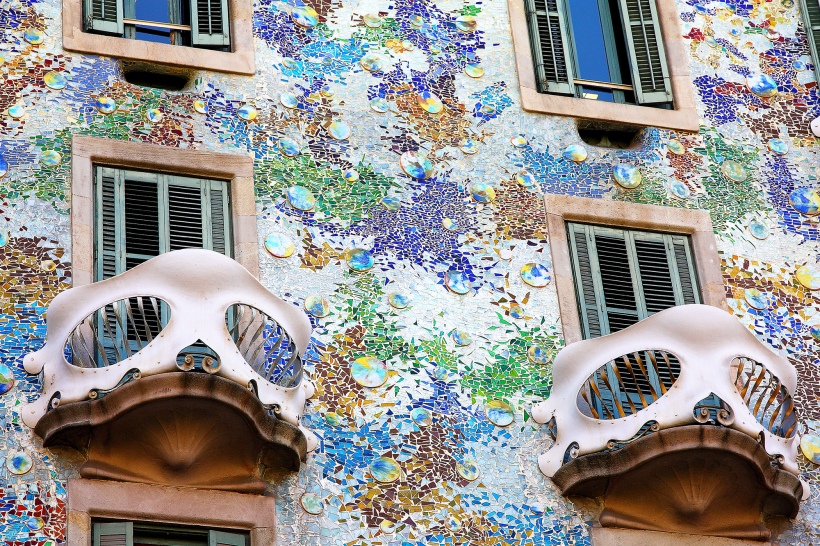 Inside Casa Batllo, the bright, vivid mosaic of the facade fades into memory, and the grand staircase quietly beckons you upstairs. Even in such a simple space, however, small touches allude to the architect’s devotion to nature. There are no corners or straight lines in this room, nor in any other part of the house – not one window, not one door, not one wall. Not a straight line to be found, no more so than you would find in a field of wildflowers, other than the floor.

Here, the interior is speckled with patterns that seem to undulate, a choice that reminded me of being underwater and looking up at the water’s surface above me. The guide suggested that the oval-shaped windows, with their honeycomb patterns, suggested the shells of sea turtles swimming through the room… and I have to agree. 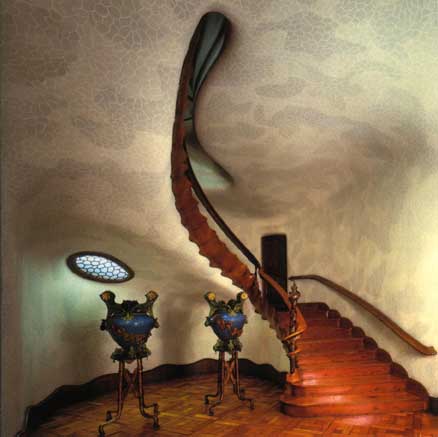 The grand staircase also bears a serpentine edge, ridged like a spine or a dragon’s tail, a symbol that Gaudi returns to again and again in this structure. 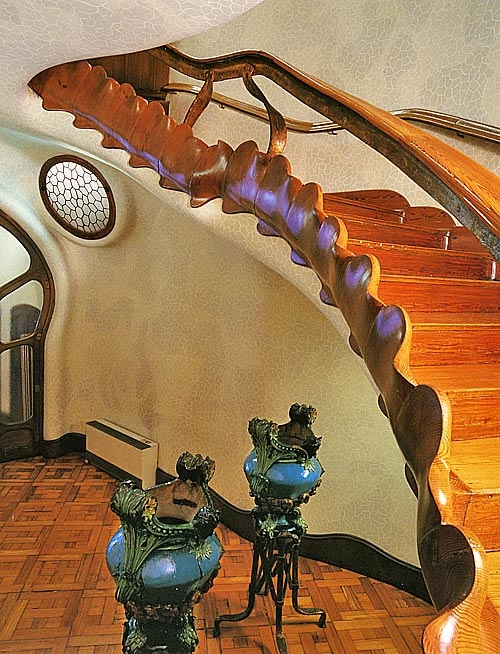 Walking up the stairs, you arrive at the second story, which features an incredible view of the street outside. Located in Passeig de Gracia, a prestigious and fashionable area of early 20th century Barcelona, the view allowed the homeowners to see (and be seen) in the comfort of their own spectacular home. 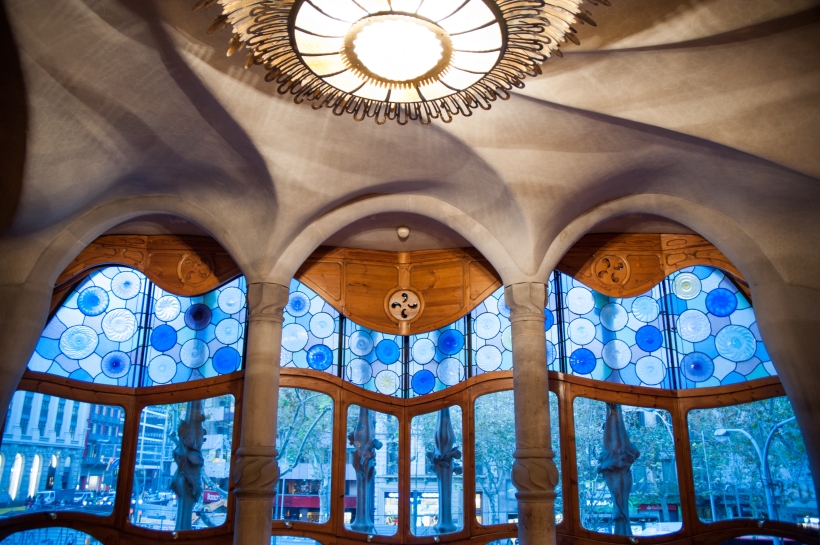 The same room, as viewed from the outside: 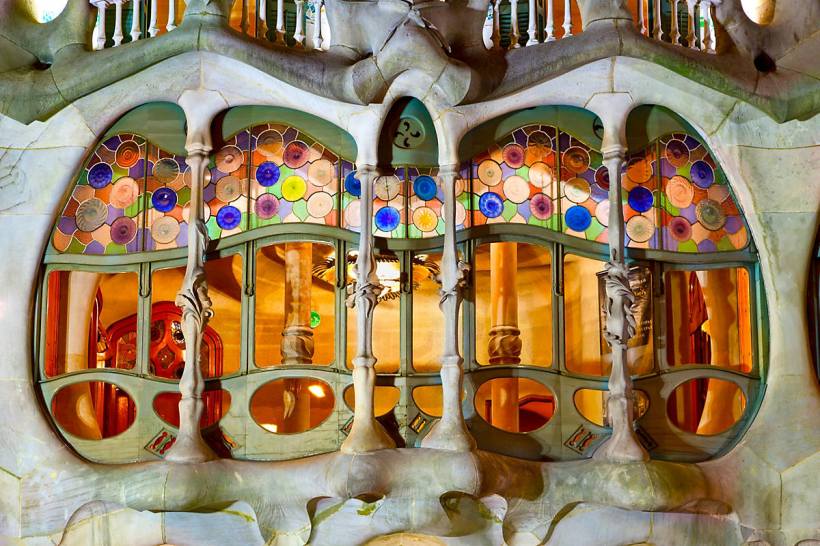 As can be seen from the previous interior picture, the ceiling is caught in a giant swirl, circling around a golden chandelier. Again, there are no straight lines – the arms of the spiral undulate gently across the entire room, linking all the columns to the central light, like an eddy of water. 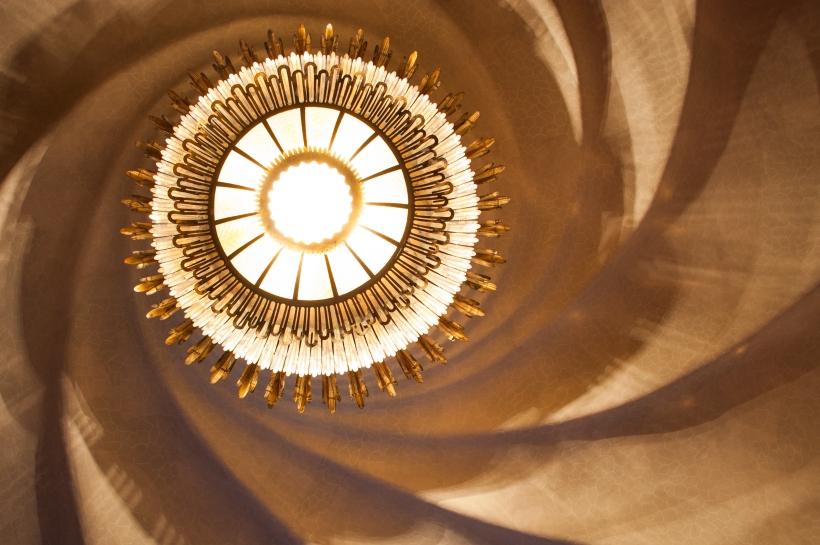 Just outside the large room, you find a blue-tiled atrium, with natural light cascading down from above. The tiles, which run several stories high, use varying shades of blue from the ground floor to the roof, color that adapts to the intensity of sunlight for each floor. 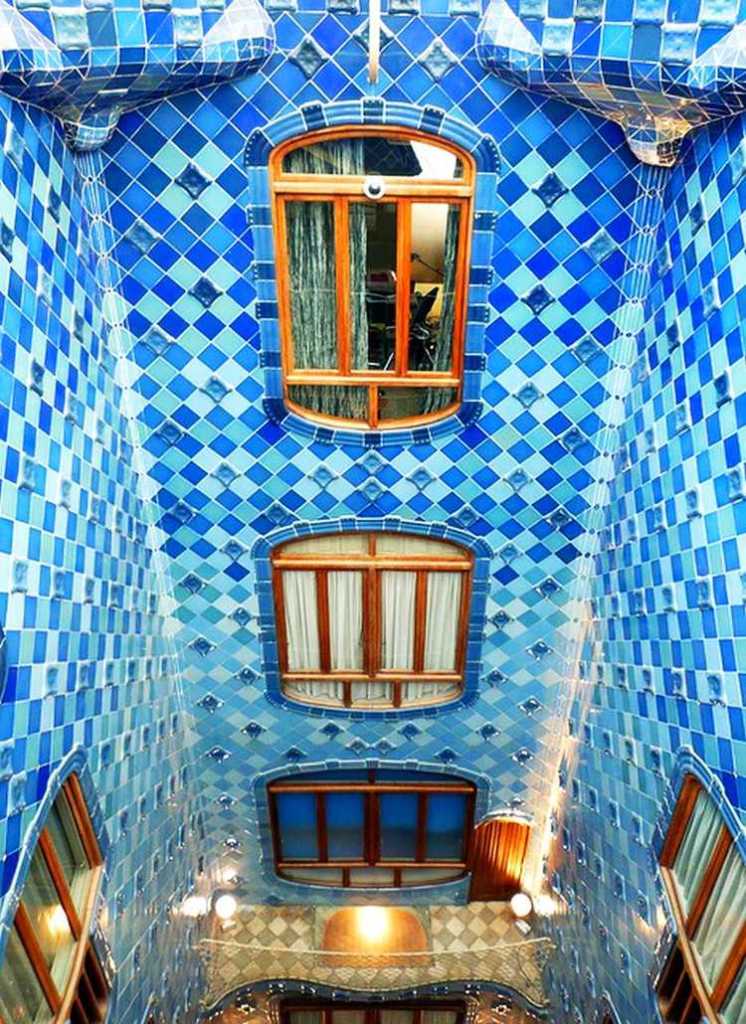 Moving through the upper floors – past currently-operating businesses and homes, all closed to the general public – you encounter the servants’ quarters, which you might imagine as simple and unadorned. Instead, Gaudi uses the space to create one of the most unique spaces in the entire building: the Loft. 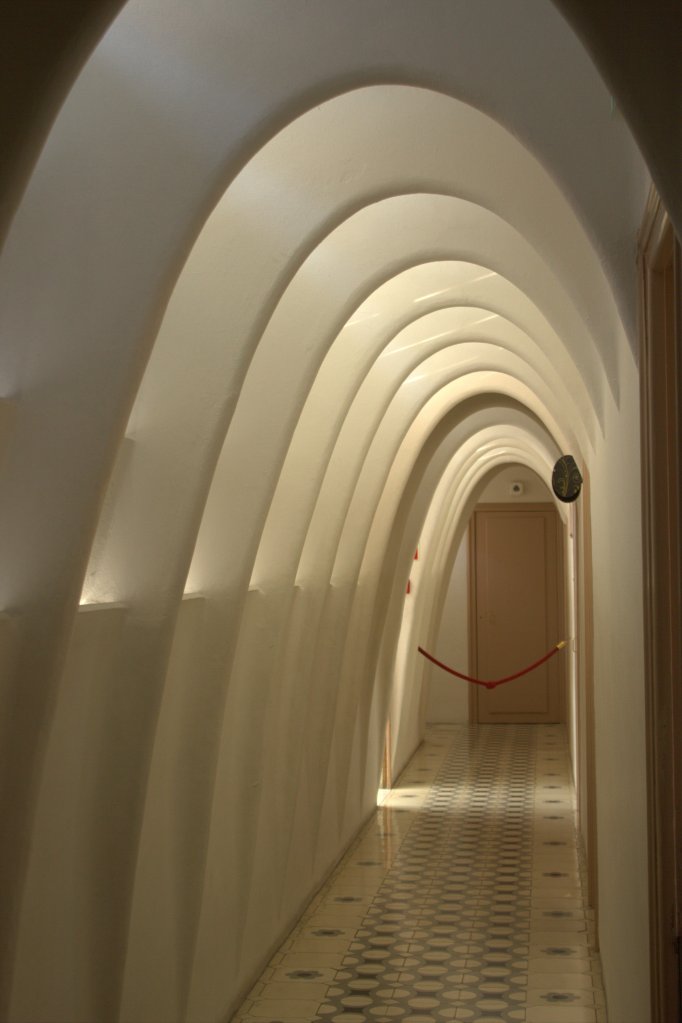 Some believe the sixty catenary arches in this space are the ribs of a dragon, hearkening back to the spiny staircase first encountered in the beginning. That might be true, but I felt like Gaudi may simply have enjoyed creating a harmonious and reassuring space out of the most narrow of confines. Walking down the corridors of the loft is like walking through a forest, in a way, with a constant canopy of leaves overhead, and natural light constantly filtering through.

The tranquility of the loft juxtaposes the rooftop, easily the loudest and most provocative place of the entire building. The museum recently began hosting evening concerts there, and it’s easy to understand why: everything from the chimney stacks to the bright, undulating scales simply screams Gaudi. 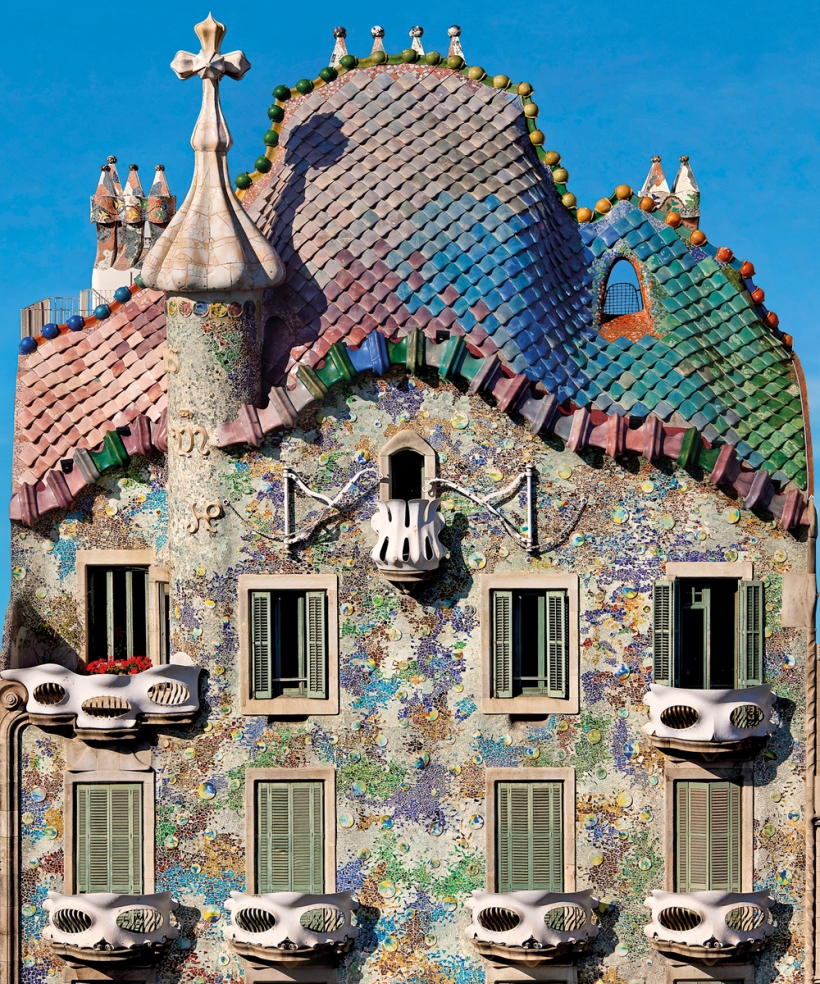 A close-up from the rooftop of the chimney stacks, “dragon’s back,” and tower: 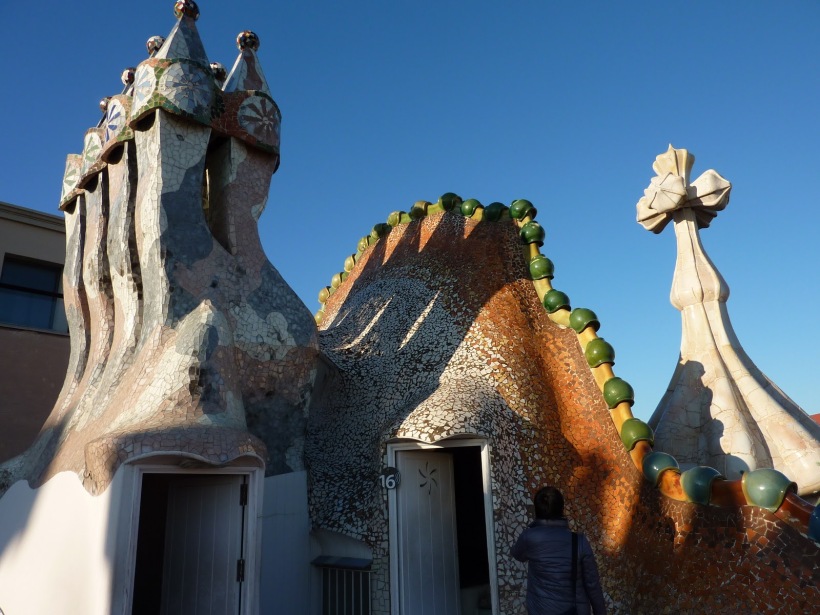 So was he a madman or a genius? Both, I believe. Salvador Dali, also from Barcelona, referred to the building’s “mutant naturalism” – which is not far off the mark. Of course, Dali also famously said that “the difference between me and a madman is that I am not mad”, so you must consider the source.

But for me, Casa Batlló was the most stunning, otherwordly, and comprehensive building I saw on this trip. Despite the intensity of its colors, curves, and forms, it inspired feelings of tranquility. More importantly, from cellar to roof, it seems to be the result of one artist’s vision – not only with one room seamlessly moving into the other, but with themes and symbols incorporated with great appreciation, and perfect design. It’s a place of wonder that I’ll return to again and again, and be mesmerized every time.